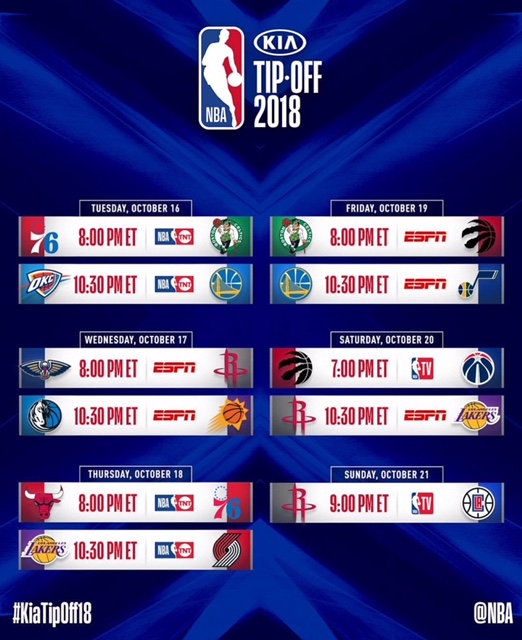 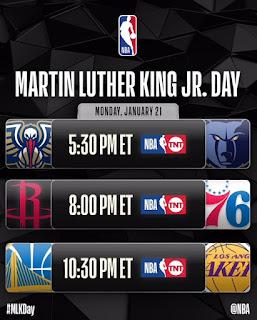 As part of the 2018-19 schedule, the number of times when teams play games on back-to-back days will be an all-time low for the fourth consecutive season.  The team average is 13.3 back-to-backs this season, down 31 percent since the 2014-15 season (19.3 per team).  For the second season in a row, no team is scheduled to play a stretch with four games in five days.  In addition, instances when teams play five games in seven days (0.7 per team) has been reduced by 42 percent from last season (1.2 per team) and 77 percent from the 2016-17 season (3.0 per team).

Also in 2018-19, the NBA will again label its schedule by week to enhance the ability of fans to follow the 1,230-game regular season.  Starting with Week 1 and ending with Week 26, the weekly structure will help reinforce awareness of upcoming games and communicate key storylines.  Each week will run Monday through Sunday.

The NBA previously announced its national television schedule for Week 1 of the 2018-19 regular season as well as its lineup of five Christmas Day games on ESPN networks and three Martin Luther King Jr. Day games on TNT.  (Click here for those schedules.)  The season will begin on Oct. 16 with a doubleheader on TNT featuring the Philadelphia 76ers visiting the Boston Celtics (8 p.m. ET) and the defending NBA Champion Golden State Warriors hosting the Oklahoma City Thunder (10:30 p.m. ET). 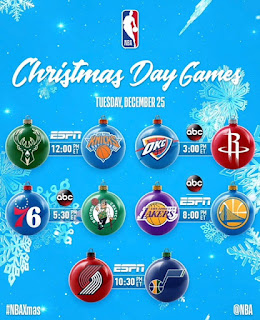 In addition to televising three Christmas Day games, ABC will have the following regular-season series:

• NBA Saturday Primetime on ABC: The fourth season of NBA Saturday Primetime on ABC will feature eight games, each scheduled to air at 8:30 p.m. ET.  The series will tip off on Jan. 19 (Week 14) with the Los Angeles Lakers visiting the Houston Rockets, which will be preceded by a special matinee broadcast on ABC as Philadelphia hosts Oklahoma City at 3:30 p.m. ET.  Other Primetime telecasts will include the Celtics playing interconference showdowns against the visiting Warriors on Jan. 26 (Week 15) and the host Lakers on March 9 (Week 21).

• NBA Sunday Showcase on ABC: ABC will present six Sunday afternoon games, starting on Feb. 3 (Week 16) with the Celtics taking on the Thunder in Boston (2 p.m. ET) and concluding on April 7 (Week 25) with the Thunder visiting the Minnesota Timberwolves (3:30 p.m. ET).

ABC will also televise the NBA Finals 2019 presented by YouTube TV – its 17th straight season as the exclusive home of the league’s championship series.

The network’s Players Only franchise – which comprises former professional basketball players in all broadcast roles – will return for its third year starting on Tuesday, Jan. 29 (Week 16) with a doubleheader showcasing the New Orleans Pelicans at the Rockets (8 p.m. ET) and the 76ers at the Lakers (10:30 p.m. ET).  Players Only telecasts will air regularly on Tuesday nights from the series’ Jan. 29 debut through April 2 (Week 25).

As previously announced, TNT’s first Thursday doubleheader of the season, on Oct. 18, will include LeBron James’ debut with the Lakers as they visit the Portland Trail Blazers (10:30 p.m. ET).

In addition to its regular-season coverage, TNT will air NBA All-Star 2019 events from Feb. 15-17 in Charlotte, culminating with the NBA’s 68th All-Star Game on Sunday, Feb. 17.

NBA on ESPN
In its 17th consecutive season of NBA coverage, ESPN will present 21 Wednesday doubleheaders and 16 Friday doubleheaders.  The network’s telecasts will be available via the ESPN App.  ESPN Deportes, ESPN’s Spanish-language U.S. sports network, will also have a full slate of regular-season games.

ESPN will be the exclusive network of the 2019 Western Conference Finals.

NBA on NBA TV
NBA TV will televise 30 doubleheaders during the season as well as a tripleheader on April 7 (Week 25), its last day of live game coverage for the 2018-19 regular season.

The network’s coverage will feature a special afternoon doubleheader on Martin Luther King Jr. Day on Monday, Jan. 21 (Week 15) as the Knicks take on the Thunder at Madison Square Garden (12:30 p.m. ET) and the Magic visits the Atlanta Hawks (3 p.m. ET).

NBA on ESPN Radio
ESPN Radio will air 26 games during the regular season, including Warriors vs. Thunder on opening night and two Christmas Day matchups in Celtics vs. 76ers and Warriors vs. Lakers.  It will also provide coverage from NBA All-Star 2019 and broadcast the NBA Finals 2019 presented by YouTube TV.

Additional 2018-19 Schedule Highlights
The NBA on ABC, TNT, ESPN and NBA TV will present flexible scheduling throughout the regular season to provide the most compelling matchups to a national audience.

NBA League Pass will offer up to 40 live, out-of-market games each week through connected televisions, the NBA App, NBA.com and B/R Live for fans who want to watch their favorite teams, players and matchups from outside their local markets (blackout restrictions apply).  Games included in NBA League Pass will be in addition to those available on TNT, ESPN, ABC and NBA TV as well as local networks (such as a regional sports network and/or an over-the-air station).  For more information about NBA League Pass, visit nba.com/leaguepass/.

The 2018-19 season will feature 42 games on Saturdays and Sundays during primetime for fans in Europe, the Middle East and Africa.  This marks the most primetime games for fans in these regions and the fifth consecutive season with at least 20 such games.

NBA programming and games are seen in 215 countries and territories in 50 languages.
NBA.com and the NBA App will provide day-by-day and team-by-team schedules as well as regular-season telecast schedules of the league’s domestic broadcast partners. 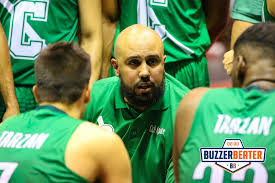 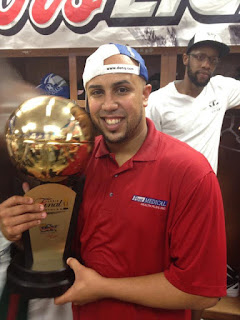 MEXICO CITY, Aug. 7, 2018 – The National Basketball Association (NBA) and Zignia Live announced today that the NBA Mexico City Games 2018 will feature the Orlando Magic playing regular-season games against the Chicago Bulls on Thursday, Dec. 13, and against the Utah Jazz on Saturday, Dec. 15 at the Arena Ciudad de Mexico in Mexico City.  The games will mark the third consecutive season the NBA will play two regular-season games in Mexico City.

As part of today’s announcement, the NBA and Zignia Live have also forged a multiyear partnership to collaborate on future games over the next several years in Mexico.

The NBA Mexico City Games 2018 will be broadcast live by ESPN and on NBA League Pass International.  Fans can register their interest in tickets and gain access to presale information, exclusive offers and more by visiting https://mexicogames.nba.com.

The NBA Mexico City Games 2018 will mark the 27th and 28th games in Mexico since 1992, the most NBA games held in any country outside the United States and Canada.

In addition to the oncourt action, the NBA Mexico City Games 2018 will feature a variety of interactive fan activities, NBA Cares community outreach initiatives and Jr. NBA programming that will bring the NBA experience to fans in Mexico City.

The NBA Mexico City Games 2018 will be supported by a full roster of marketing partners, including Nike, SAP, Gatorade and Tissot with additional partners to be announced in the coming months.

In 2017, the NBA played four games in Mexico, which marked the first time the league has held four regular-season games in one country outside the U.S. and Canada in one calendar year.

Following the conclusion of the NBA Mexico City Games 2020, the league will have played 32 games in Mexico since 1992.

Details about future games will be announced at a later date.

Fans can find more NBA information at NBA.com, Facebook.com/NBA_Mexico and on Twitter (@NBAMEX).  Fans can also purchase all the latest NBA merchandise atNBATienda.com and at the Arena Ciudad de Mexico on game nights.

NBA Commissioner Adam Silver:
“Returning to Mexico City for two regular-season games this season reinforces our commitment to growing basketball in Mexico and Latin America.  NBA teams have been playing in Mexico for more than 25 years, and the Bulls, Jazz and Magic organizations are excited to continue the tradition of bringing the live game experience to our passionate Mexican fans.”

Zignia Live Director of Business Development & Strategic Partnerships Ignacio Sáenz:
“I´m so proud, that once again, NBA Mexico City Games will be held in our
country this upcoming December.  The enthusiasm and dedication of every Mexican fan resulted in a multiyear partnership, that will see future games played in Mexico City over the next several years.  The Arena Ciudad de México is the ideal setting to enjoy the magic of basketball as a family, and we are sure that the games will be an unforgettable and memorable experience for all. We thank the NBA, the teams and of course, the fans in Mexico for all their support. We continue making history together!”

Orlando Magic CEO Alex Martins:
“Having played in England twice, Japan, China, Mexico and Brazil, the Orlando Magic are always honored to participate in the NBA’s Global Games and look forward to again representing the Central Florida community and the NBA.  From our previous experience of playing in Mexico City, we know the passion of the fans and look forward to this amazing opportunity.”

Chicago Bulls President and COO, Michael Reinsdorf:
“We are honored that the NBA invited the Chicago Bulls to be a part of sharing a game we love with a global audience.  While our home town is Chicago, the Bulls are fortunate to have fans around the world and we are excited to take our team on the road and help bring the NBA-game experience to Mexico City.  On behalf of the entire organization, I want to thank Adam Silver, the NBA, and Mexico City for this opportunity.”

Utah Jazz President Steve Starks:
“The Utah Jazz are excited to play in Mexico City and are proud to represent our fans and the NBA on a global stage.  This will be our fourth time playing in Mexico and first time back in 15 years. Our organization thanks the NBA and the people of Mexico City for this unique opportunity.”

About the NBA
The NBA is a global sports and media business built around four professional sports leagues: the National Basketball Association, the Women’s National Basketball Association, the NBA G League and the NBA 2K League.  The NBA has established a major international presence with games and programming in 215 countries and territories in 50 languages, and merchandise for sale in more than 125,000 stores in 100 countries on six continents.  NBA rosters at the start of the 2017-18 season featured 108 international players from a record 42 countries and territories.  NBA Digital’s assets include NBA TV, NBA.com, the NBA App and NBA League Pass.  The NBA has created one of the largest social media communities in the world, with 1.5 billion likes and followers globally across all league, team, and player platforms.  Through NBA Cares, the league addresses important social issues by working with internationally recognized youth-serving organizations that support education, youth and family development, and health-related causes.


Zignia Live is a subsidiary of Avalanz Group, and is known for hosting first class events in the most modern and comfortable venues every year while offering the public a unique and world-class experience every time.  In partnership with leading companies in the live entertainment industry, Zignia Live brings the best music, family and sporting events closer to Mexican public. 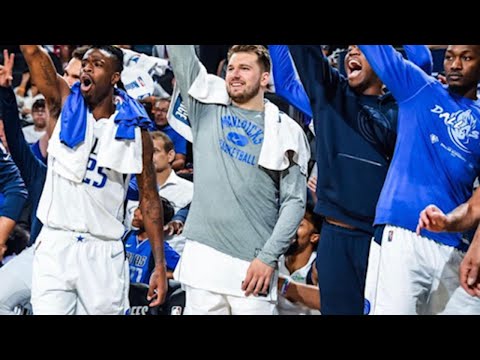